You are here :- ourlife.co.uk » My Slightly Miffed List » Domestic-Bliss » Being called a “Househusband”

Being called a “Househusband” 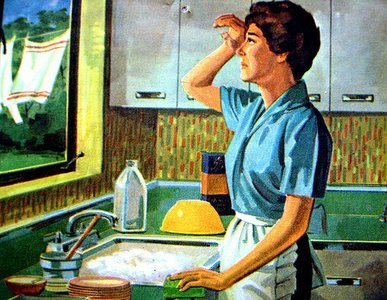 I vaguely recall hearing the term ‘houswife’ for the first time when I was a little boy back in the ’60s. I don’t have a an exact recollection but the word rattled around in my head for a bit as it seemed such a stupid one. Back then you would get these poor women introduced on these television quiz shows: “Gladys is a housewife from Leeds and enjoys laundry, washing-up and looking after the husband and kids”. Yeah, that forced smile of Glady’s wasn’t just studio nerves.
If my mum ever recieved a Christmas or Birthday present for the house, rather than for herself, she would throw it on the floor, where it would remain until some kind soul picked it up. Back in the ’60’s gender roles were still fairly well defined and men were still routinely patting womens bottoms. I might have gotten away with it myself a couple of times in the 1970’s during my own formative years. I kind of came along at the tail-end of the bottom patting era.

Anyway, my wife is getting me a nice new ironing board for Christmas!

Just an update here (January 2017). I didn’t get an ironing board but I did get two pairs of pink washing-up gloves. 🙄 At least I think it was two pairs, I seem to have mislaid them somewhere now . . . . .

Seriously though, ‘Stay at home dad’ is a much nicer term than ‘househusband’. Reinforces ones status as a father rather than as a domestic skivvy.

This site uses Akismet to reduce spam. Learn how your comment data is processed.