Here I look at the Tensor Form third-order derivative of a function-of-a-function. This is based on the book by Pavel Grinfeld on Tensor Analysis.

As promised, I will try to look at the tensor expression for

Before I begin, let’s just take a look at the first-derivative and the second-derivative, from a previous post, Tensor Analysis – Grinfeld – Chapter 4. The first-derivative is obtainable, in the final Tensor Form, just by using chain rule for a function-of-a-function:~

We can differentiate this a second time, again using chain-rule, for a function-of-a-function, and also the product-rule – for one differential times another differential. (The details are given in the previous post.) We get:~

This then begs the question: Can I differentiate this expression, again, to get the tensor form for the triple-derivative that we require? Let us try:~

Carrying out the differentiation, we get:~

. So the second term in the second derivative gives us two more terms in our triple-derivative.

The Proof of the Pudding

Exercise 35, in Pavel’s book asks us to find

Fortunately, this is included in the model anwers provided by David Sulon. David does his differentiation in the reverse order to myself (the results will be the same). I therefore want to plug the appropriate ones, twos and threes into our tensor form of the triple derivative for

To assist us, we re-arrange the triple differential as:~ 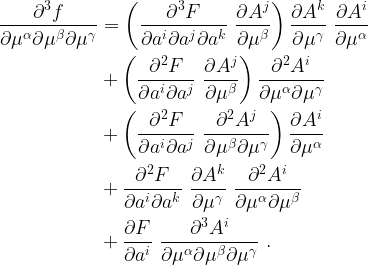 It is worth making a couple of checks before we begin:~

For each i, I will sum over j, for the first three terms, and then sum over k, for the two terms containing k.

For all those folk following my deliberations here, I apologise for the haphazzard way that it seems to be coming together (23rd June 2018) 🙂

For Exercise (35) David Sulon has, after correcting for a couple of typos, and reversing the order, of differentiation (as mentioned earlier):~

What I will do now is carry out the differentiation on the first of these three terms and compare the result with my tensor form, for i = 1, above :~ 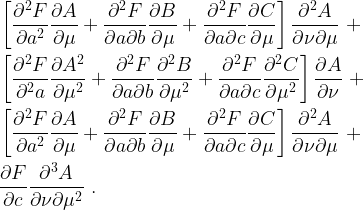 If you convert the A, B and C, in the equation above, to the corresponding indexed terms in the tensor form, for i = 1, or visa versa, you will see that this is indeed the triple derivative term, which I worked out above. I found this more difficult than working with the tensor form, which is one of the reasons for using Tensors. It did take me a while to get the three i-components of the tensor form right. Again, one of the reasions for using tensors is to just get going with whatever maths you’re doing and then sort out the algebra later. Much better than trying to do both at the same time.

I hope that this has been worthwhile, I would really appreciate any comments. Thanks for visiting. John

This site uses Akismet to reduce spam. Learn how your comment data is processed.